I recently offered to digitize all the 4x6 inch family & childhood photos prints, which ended up being a harder task than I thought it would be due to some newbie mistakes.

Originally, I had thought it would be a piece of cake to simply scan multiple photos at a time with a flatbed scanner, which I could trigger from my computer and save images directly to it via the macOS Image Capture app. I'd then write a quick script to detect whitespace between photos and crop them out.

To maximize the number of print photos per scan, I arranged my scans like this: 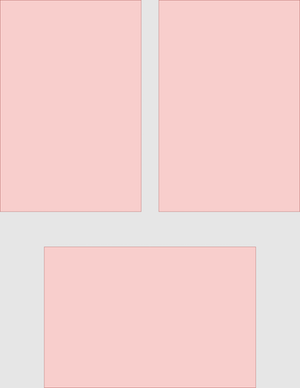 This turned out to be a terrible idea.

Scanners are not perfect, and both scanners I used in the process of digitization captured black bars near the edge of the scan, particularly on the side where the lid closes:

This is a classic example of something really easy for the human eye to detect, but something that is difficult to get computers to detect. Auto-split features in Photoshop didn't work, nor did open-source tooling like ImageMagick + Fred's multicrop.

So, did you volunteer to digitize a bunch of photos as well? Don't be like me, simply arrange your photos like this and you'll have no problems at all:

I doubt this will be relevant for much longer since I'm likely the last generation that will need to do this, but hopefully this helps!

But wait, how did I fix it?

After learning the above, surely I didn't have to re-scan all the photos you might ask?

I was not thrilled about the prospect of cropping manually, but I was also not about to rescan some 2000 photos. With a bit of help from ImageMagick, I was able to get most of the pictures auto-cropped and rotated thanks to Fred's great script.

The photos that were joined by a black bar would still needed to be split manually, but most of the scanned photos could still benefit from being auto-cropped and rotated.

I wrote a quick script to address the issue: